The tunnels still have no supporters

The Legislative Council’s Public Works Committee has now published the 576 submissions on the Western Harbour Tunnel and Beaches Link tunnel — almost all of them opposed, for environmental, economic, social and technical reasons. See them here.

The Public Works Committee has published the submission of the Committee for North Sydney. Four pages of eye-opening revelations. Read it here.

Those interested in bikes, and all forms of non-private-car mobility, and good planning, might like to read the submission of the Committee for North Sydney in response to TfNSW’s extraordinary concrete ramps onto the Bridge.

It’s not the role of the Committee for North Sydney to confront governments or uphold standards of transparency – our mission is “to facilitate public and expert contributions to the progressive improvement of North Sydney, through strategic planning, good policy and urban design.”

However, since the North Sydney city centre is faced with crowding, pollution and gridlock as a result of the current design of the tunnels, we must talk about fatal flaws in the tunnel environmental impact statements (EISs).

The EISs appeared out of nowhere (a year apart), nearly 20,000 pages for projects that would cost between $20-30 billion (no-one is saying). Each EIS accepted submissions in just two months. After that we were told, “That’s it! We’re building them anyway.”

Many serious errors and inaccuracies were exposed by numerous submissions – all of them summarily dismissed by the NSW Government. Here are just a few of them.

What credibility does a supposedly scientific assessment have, when it is incomplete, selective, and shaped by political priorities? What are they hiding?

Ask the Mayor and your Councillors why the North Sydney Council has fallen silent for the past year in the face of all this evidence of the bad planning of the tunnels and their extremely negative impacts on our city.

A meeting of the North Sydney Precincts on 22 June 2021 called for alternative ways to access the Western Harbour and Beaches Link tunnels. See our news item here.

When submissions closed on Friday 18 June 2021, many hundreds of submissions would have been made to the Inquiry. We may now learn why the two environmental impact statements had no explanation of the chosen plan, no alternatives, no options, no financial analysis, no business case, no useful traffic forecasts, and no assessment of traffic impacts on North Sydney.

Maybe we will now learn what the NSW Government has been hiding!

Read the submission of the Committee for North Sydney here.

The tunnels have no public support

Last year and earlier this year everyone had an opportunity to make a submission on the environmental impact statements for (i) the Western Harbour Tunnel and Warringah Freeway Upgrade (WHT & WFU) and (ii) the Beaches Link tunnel. 3003 individuals, organisations and agencies made submissions. 90% opposed the tunnels. A mere 2% supported the tunnels. The public was nearly unanimous: Don’t build them!

“The EIS does not explicitly indicate the sensitivity of the air quality impacts… nor the magnitude of the potential error in predictions of traffic.”

The NSW Chief Scientist (one of the few independent officials left) commissioned an expert review of the Beaches Link EIS. Read it here, and note the final paragraph. This is what the report is actually saying:

The traffic forecasts are dodgy and there’s no evidence that air pollution will diminish. The EIS cannot be believed.

The future has arrived

But the past lives on in Sydney

We need answers before the bulldozers move in

The Committee for North Sydney:

The NSW Government says it’s a $15 billion project — 17 km of road tunnels from Rozelle to Balgowlah and Seaforth. Any attempt to explain its disastrous impact on the whole of North Sydney is going to be complex.

But it’s worth reading this map (of the major roads of the lower North Shore) to understand that there is a fatal flaw in the planning. There’s no access to the tunnels from the main roads where the traffic is. Instead, heavy traffic is forced to use rat runs and local streets to get to the Berry Street on-ramps, in the gridlocked city centre.

Both the Western Harbour Tunnel and the Beaches Link begin in the thick of the Warringah Freeway, and the only way to access them, for the whole of the Lower North Shore area in the map, is to fight your way though the North Sydney city centre, and get to the Berry Street on-ramps (the black arrow in the map above). As we say, Gladys Berejiklian’s new tunnels start in the heart of the city centre!

Berry Street is already a one-way on-ramp to the Warringah Freeway, north and south.

In a few years – if our popular and strenuous defence of the city centre is brushed aside by the road builders, the planners, the environmental, economic and social agencies, by the politicians and the courts – it will be the main on-ramp to the Western Harbour Tunnel, and by 2027 nearly all local traffic will be funnelled into this congested freeway on-ramp for the Beaches Link as well.

The Committee for North Sydney has published a report showing the catastrophe that will be Berry Street. The report explains what is wrong with current transport plans for North Sydney, how it came to this, and what can be done.

See what “integrated land use and transport planning” should look like, in our Issues article, Tale of two cities – in one CBD.

A strategy for the whole city centre

The Committee for North Sydney has completed a strategic planning document called Five Big Ideas for the Future City Centre.

The strategy presents a long-term vision for the city centre, based on five integrated ideas. The five ideas work together, to guide the city towards a transformation from ‘an office park with through traffic’ to a living ‘place for people’. Read and download the strategy here.

The Committee for North Sydney supports the North Sydney Council in planning more improvements to the city centre, and invites all those with an interest in North Sydney to work together to fight for a better future.

Save the MLC Building

The MLC was THE pioneer in so many ways. If it is swept aside (to make room for a new building (widely panned by urbanists) it takes with it markers, symbols, records and memories that form an intrinsic part of the Australian story. Besides, for many, it WORKS. It looks good. It is well behaved. It plays an important role in defining the city centre.

Geoff Hanmer, President of the Association for the Committee for North Sydney, has assessed the significance of the MLC Building.

And read the latest news in News in February and earlier news items.

The Committee for North Sydney is focused on the long-term public good. We think that this involves open, inclusive planning that identifies goals for the city, and sticks to them.

As Elizabeth Farrelly said at our October AGM:

The Committee for North Sydney is focused on the big issues:

We’ve kept to that focus during the past few months – please take a look at our NEWS page.

We’ve had a well-attended AGM and a productive planning workshop. We’re actively planning our program for 2020.

It’s all about supporting good planning for North Sydney, and finding ways to work with the community and decision makers (state, local and business) towards much better outcomes.

The Committee for North Sydney would like to hear from you, and to keep you informed of issues and events.

Please let us know what you think — just click on our email address:
info@committeefornorthsydney.org.au

Read all about it!

Reforming planning — we’re all for it!

The NSW planning system needs long-term reform, back towards the rule of law — less political, less litigious, less impenetrable — and towards open and expert assessment of explicit rules adopted through transparent public processes. It’s nothing like that at the moment.

The problem is… it’s not so easy, and when governments say that overnight they’ll make the planning system “quick and simple” they may be avoiding the core issues.

Historians have failed to explain to us that NSW’s only coup was when Governor Bligh was arrested because he insisted on adherence to a town plan! Ever since, the arm-wrestle between government and landowners has followed a predictable course.

You’ve seen the announcements. Here is a brief paper on what it is about. And here is an even briefer version to fit into a confined space in the SMH.

Spot rezoning, deals, fast tracking, OVERdevelopment… Is congestion and loss of urban quality inevitable? Yes, on present indications. But not if transparency, probity and expertise is restored to the planning system.

The residents said OVERdevelopment – we’re OVER it!
The Independent Planning Commission agreed!
Is this the turning point?
Read about the details of this important decision here.

Have you heard about ‘value capture’?

It must sound good — Sydney Metro and Ministers are beginning to talk about ‘value capture’ a lot — but is it good for the North Sydney city centre? The answer to that question is here.

That’s not the Committee for North Sydney!

And it wasn’t said yesterday.

Jeremy Bingham, lawyer and one-time Lord Mayor of Sydney, made that statement in 2000, in an interview for the Council’s published history of North Sydney planning, marking 35 years after the adoption of the 1963 planning scheme. He went on:

“It has no heart. It has no central point. It has no civic spaces. It has no style. It’s a mish-mash. It’s a conglomerate of all sorts of things… You’ve got a whole series of half-baked things. And the flow of morning and evening peak hour traffic through there makes it a very difficult area… It just hasn’t had anything remotely like the level of planning and care and attention over the decades that it should have had… 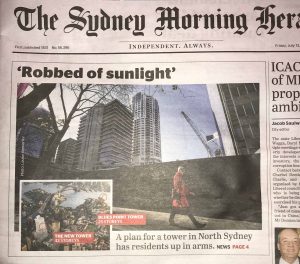 Senior journalist Jacob Saulwick reported on the launch of the Committee for North Sydney on 11 July 2018.

His insightful article was published online on Thursday 12 July 2018, and on pages 1 and 4 of the next day’s edition of the paper.

Here’s the link to the online story.

In a major move, the North Sydney Council has written to the Minister for Transport, calling for alternative design options for the over station development at Victoria Cross station, and further community engagement. The resolution adopted all-but-unanimously by the Council can be seen here.

How the Committee for North Sydney sees the future city centre

The image on the Committee page — also used in various forms on our publications — is a modified detail from ‘Sydney’, a large work by onetime-North-Sydney artist Greg Hyde. Thanks Greg for your support.

Ralf Alpert, Waverton Precinct member and Founder and MD of  Waverton’s well-named Friendlyware, has been instrumental in getting us online. Friendlyware is a top-rated IT support company for Sydney’s small and medium businesses. Thanks Ralf!

The North Sydney Council published an excellent summary of what is known about the North Sydney area as it was in 1788, about the people whose land it was (and ‘always will be’), and about the First Nations story since.

The monograph is Aboriginal North Sydney, by Dr Ian Hoskins, North Sydney Council Historian. It was first published in 2006, and updated in 2019. We make it available here.

The Committee for North Sydney recognises the land as that of Cammeray and his people (the meaning of Cammeraygal) and pays respect to descendants and First Nations people of the region.

News and information on other pages