The Association for the Committee for North Sydney was incorporated on 4 May 2018 and registered by NSW Fair Trading with the registration number INC1800634. The registered address of the Association is 37-43 Alexander Street, Crows Nest NSW 2065. 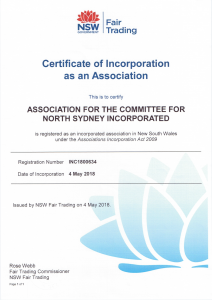 The Constitution can be accessed here. The Association held general meetings on 9 May 2018 and 25 June 2018 and the inaugural AGM on 30 October 2019. (In accordance with Government policy, meetings of members including the AGM are deferred due to the pandemic.)

Origins of the Committee for North Sydney

By the beginning of 2018 there was widespread concern in the community and in professional circles that the scale and type of development in North Sydney was at a critical point.

The Council seemed focused on the residential areas — pursuing a number of major projects and many improvements to the public domain — to the exclusion of serious and creative thinking about where the city centre was going.

To many, the city centre seemed to be going south.

The issues that increasingly kept the locals away from their city centre were being exacerbated.

The proposals for the massive, wide, 42-story commercial building over the metro station seemed to sum it all up: windy, sunless, congested streets and footpaths; no indication that services, activities, civic functions and public space would get any better.

On the contrary, the most sociable corner of North Sydney, Tower Square, had just been demolished by Sydney Metro.

These matters were discussed at Precinct Committee meetings, and at the Combined Precinct meeting.

The Chair of the Waverton Precinct, Iain Bartholomew, convened a joint meeting of the leaders of the Edward, Lavender, Union, Waverton and Wollstonecraft Precincts, to discuss the formation of a high-level expert committee to stimulate thinking and discussion about the needs and potential of the city centre.

There was enthusiasm for the initiative. Members of the Precinct Committees met to work out ways to implement it.

With the endorsement of a second joint meeting of the leaders of the Precinct Committees, the Association was quickly constituted and registered, and possible members were asked if they would serve on the Committee for North Sydney.

On 25 June, the newly elected Board had formally appointed twenty-four professional, academic and community leaders to the Committee.

This website, maintained by members of the Association, tells the story of what happened next.