1   Giant buildings in city centres generate a lot of movement. If Sydney Metro’s massive tower were to be built (it won’t be), together with very big buildings almost adjacent in Denison and Mount Streets, there will be a lot more traffic, and maybe ten thousand extra pedestrians with nil additional space for them.

But worse is planned.

2   If the western harbour tunnel is built (it shouldn’t be) it delivers traffic from the other side of the harbour onto Falcon Street, which appears to be the only off ramp in this area. But it also attracts a lot of new traffic into the centre of the North Sydney city centre! To head south under the harbour, or north to the M2 or the Beaches Link, you have to use Berry Street. Already a traffic sewer, Berry Street is the new tunnel’s only on ramp for cars, trucks and buses heading north and south. Write off that part of the city centre.

3   None of this is explained in the RMS’s thick glossy brochures on the tunnel and the link. Berry Street is studiously not mentioned. All we have to go on is a small map. 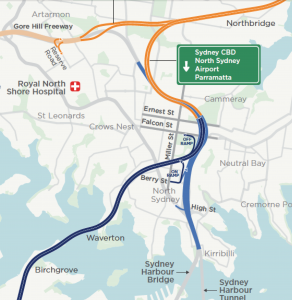 4   And all that traffic travelling south from the peninsula to North Sydney? No mention of that either. In the road sign on the map above, it is apparent that peninsular traffic can exit into North Sydney – but there’s  no indication how this happens, and whether that traffic also finds its way into the city centre, already just an ‘office park with through traffic’.

We need help to understand (and resist) what is coming to the city centre with the western harbour tunnel.

Transport planners, insiders, researchers – please help the Committee for North Sydney analyse and publicise what the RMS has in mind for us, and what we can do about it.

Write to us at info@committeefornorthsydney.org.au.