Crows Nest: Victory in a battle, but there’s still a war to win

In an innocuous note on its website, on 12 December 2019, Sydney Metro said that AW Edwards, CPB Contractors and Laing O’Rourke had been invited to submit tenders for the metro station at Crows Nest. Here’s Sydney Metro’s announcement.

A significant change in tactics was obscured by the bland words:

Sydney Metro is seeking a construction-only contractor to deliver Crows Nest Station… A delivery partner for the over station development will be selected via a separate procurement process.

Matt O’Sullivan in the SMH on 30 December 2019 understood the significance of this announcement.

The NSW government has split plans to construct a new metro train station on Sydney’s north shore from the development of towers above it, in the wake of widespread opposition from locals.

The government ditched a tender for an “integrated station development” at Crows Nest last year… The rationale for “integrated developments” is that offices, shops and apartments help to subsidise the cost of the train station below, which can run into the hundreds of millions of dollars.

The change of tack at Crows Nest comes as a recent report by the NSW Audit Office shows that the state’s lead transport agency suffered a $258 million loss on integrated station development agreements for metro lines in Sydney in the year to June [see ‘Other losses’ on page 21 of the Auditor General’s report].

This is a big victory for Crows Nest and the residents from North Sydney to Woollstonecraft to Greenwich, who vigorously campaigned under the banner OVER development we’re over it!

It also seems to confirm our analysis: planning in the public interest has been subordinated to the kinds of financial games that merchant bankers love to play.

But that’s not all it shows – it shows there’s plenty of trouble ahead.

Who thought that planning for a ‘priority precinct’ would lead to a high-rise shadow spreading across Wollstonecraft?

Who thought that developers would be anticipating a green light for 60-storey buildings in the heart of the Crows Nest village?*

Who thought that when Sydney Metro came to town with sketches of low buildings, and talk of maintaining the local character of the village, that they would now propose a row of big buildings, two of them 27 storeys high?**

Certainly not members of the community — they unanimously are up in arms.

Read the submission to Sydney Metro from the Committee for North Sydney.

The submission of the Greenwich Community Association is concise, lucid and compelling.

*  60-storey buildings are those buildings that disappear into the sky seemingly with no end point. They approach the scale of the MLC Centre and Chifley Tower, successively Sydney’s tallest buildings. Overwhelming. Belittling everything around them. Big traffic generators. Big shadows!

Perfectly capturing the deceit of the entire commercial project of Sydney Metro, the hoarding in place around the Crows Nest Metro site actually still shows the building on the left — a pleasant, open, sunny entrance to a local Metro station.

In reality, Sydney Metro has already determined that, no matter what, they will build an ugly and irresponsible above-ground car-park on their site. At five levels, this alone is about as high as their pretty drawing. Then they will stick twenty-two floors of apartments above it, far taller than any building in the area. Lucrative!

Barbara DeGraff ‘s statement offers ideas for others in responding to Sydney Metro’s proposals. Barbara says it’s important to increase the number of objections to the over station development of the Crows Nest Metro. She encourages people to cut and paste from the statement, changing the order and maybe putting it in your own words.

Barbara’s statement can be read, copied and downloaded here.

It really makes a difference! 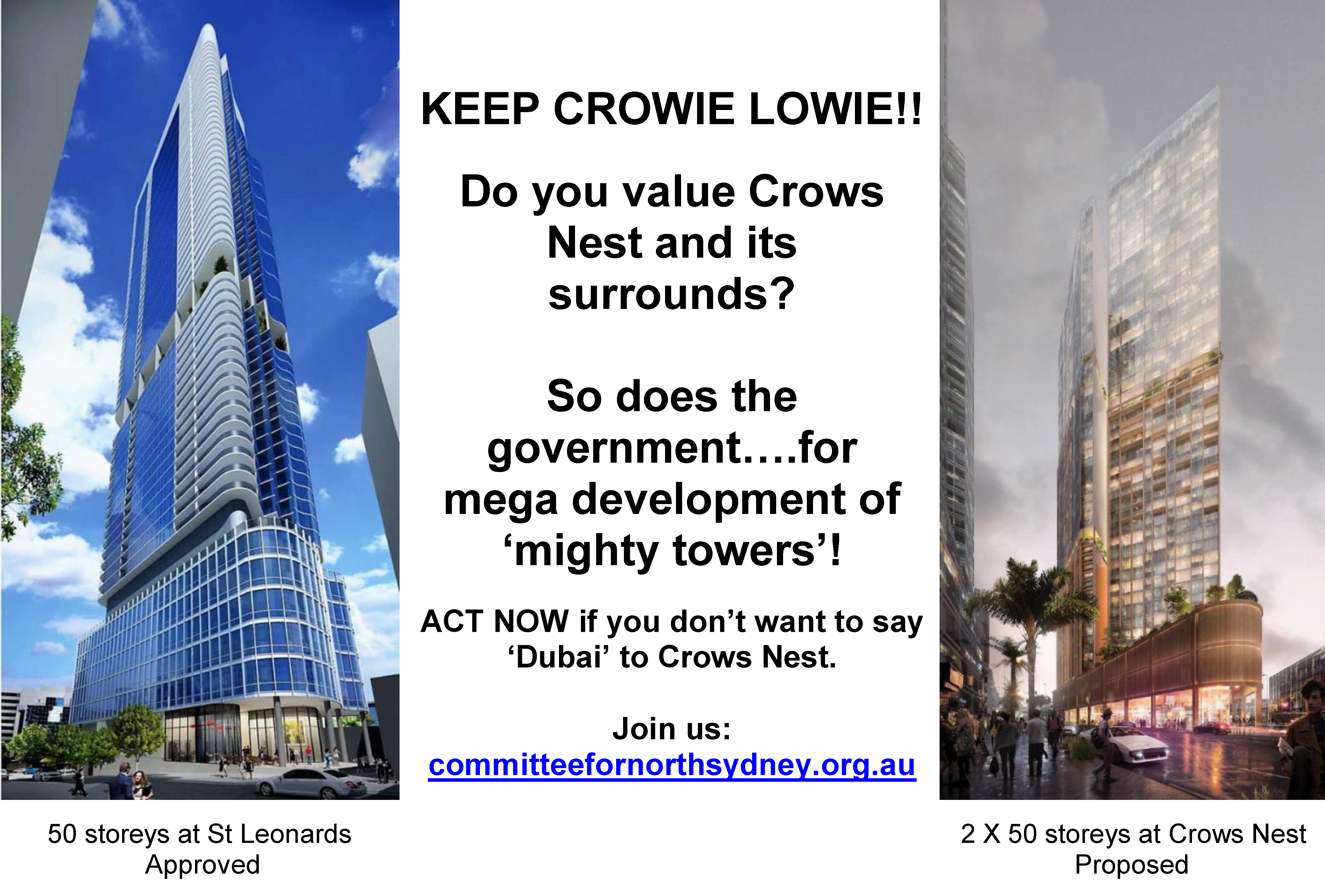 News and information on other pages